bristolindymedia Posted on April 25, 2014 Posted in Main Feature No Comments 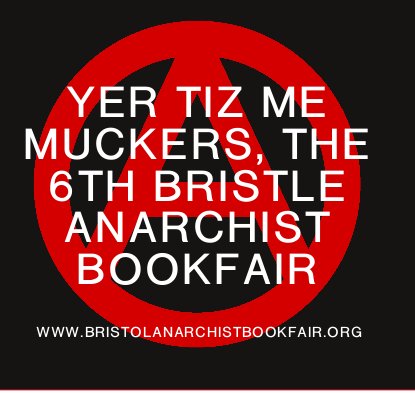 Ideas can ignite change – Spark it up time!
The Bristol Anarchist Bookfair returns for it’s 6th bash-back on Saturday
26 April, with enough ideas, debates and books to spark a conflagration.
So come on down and add your fuel to the fire.

With some 60 tables of stalls; and 33 meetings across 6 spaces, including the Bookfair Assembly Room, Permanent Culture Now Marquee, and of course ye olde Radical History Zone just 5 minutes down the road at Hydra Bookshop.

Plus an all day indoor vegan cafe from Kebele Kafe & Anarchist Teapot, kids space indoors and small adventure playground outside, and a permaculture zone in the Trinity Garden for drinks and seedbombs. All are welcome, entrance is free – but donations towards costs are welcomed. (Don’t forget the After-Party later!)

As the sun shines old friends gather, new friends meet, ideas are understood as networks spread, plans are hatched and plots thicken, and there’s just time for a cuppa before the next session. Don’t miss out – pass it on! See you there then.

How to get there: Find out about the massive arms trade centred in Bristol. BAAT want to raise awareness and build a campaign against this.

The Room With A View: How to deal with nuclear energy with South West Against Nuclear

A talk illustrated by film and discussion of our energy future. The government plans to build two nuclear reactors at Hinkley Point in Somerset and one at Oldbury in Gloucester. This makes a mockery of Bristol’s image as a green city.

Migration is human, border controls are not inevitable. They cause violence and affect all of us, to different degrees. We will work with some theatre tools – sound, image and word and experiment to see if we can gain ground in the battle of the story on migration.

A discussion of the control of the poor though debt, means testing and guilt for the benefit of the rich. From past to present the names may change from the Speenhamland System to Tax Credits, but the approach never does.

Radical History Zone: The Free Festival Movement In the 1970s with Wally Dean

From the heyday of the anarchic free festival movement and its oppression during the Thatcher years through to the continuing struggle to free Stonehenge today.

We felt some of Bart Simpson’s calculations on this year’s bookfair poster were at best debatable and at worst problematic. Does Work minus Bosses, or Money minus Bankers really equal anarchy? What do we mean by the term “Work” anyway? And can money really have a role in an Anarchist society?

The Dressing Room: Alternatives to Prison in the South West with Bristol Anarchist Black Cross

This workshop looks at how we can get people out of prison, keep them out and prevent new people going in while we dismantle the prison system and build alternatives to cages.

The Room With A View: The lessons of the 3 Cosas campaign

The story of how precarious, mostly migrant outsourced workers at University of London got organised and fought back, in conflict with their employer, the university management, the police and the bureaucracy of Unison.

Last November thirty workers were arrested due to participation in an education strike. The increase of detentions and laws against protests show the government wants people to keep quiet while they dismantle basic civil rights and attack their living conditions.

Steve has turned a tennis court into a growing project, set-up Bolton Urban Growers and two allotments. Learn how to start an urban permaculture group, get people involved and make yourself visible to partners and funders.

Anna will treat us to a foretaste of forthcoming The Fair Fight described as ‘a pulsating historical novel set within the world of female pugilists and their patrons in late eighteenth-century Bristol’.

The Dressing Room: Rules without Rulers: Possibilities and Limits of Anarchism

Matt will be discussing the central themes of his upcoming book, Rules without Rulers,which asks whether anarchists themselves have a viable vision for a world without state – exploring issues of freedom, ethics and power.

The Room With A View: Bitcoin for Activists

Bitcoin and crypto-currencies are big news. But what do they have to offer anarchists and activists? This workshop will provide a basic introduction to bitcoin and how its features can be used to our advantage as an economic tool and a subversive unregulated alternative to the current financial system.

A couple of months ago we found out that we have an imminent and nationally strategic threat on our doorstep. This is a basic introduction to the Helius Biomass plant and what it would mean for Avonmouth residents, land grabs, and us. For anyone who likes trees, justice and pissing off the Merchant Venturers.

Come along and hear from Bristol’s own food campaigners, producers and activists from Trinty Community Garden, Barton Hill Walled Garden, Sims Hill Shared Harvest, Bristol Incredible edible, Feed Bristol and the Blue Finger Alliance and learn how to get involved in a movement that is literally growing.

Taking inspiration from Situationism and social ecology, 1970’s anarchist collective Street Farm offered a powerful vision of green cities in the control of ordinary people. And find out who the Bristol Gnomes were.

Solidarity is a central idea which we organise round but how does it work in practice – especially across social and political differences? People actively showing solidarity with workers, migrants, claimants, and local and international struggles discuss what has been productive and challenging in their solidarity work.

The Dressing Room: Prism – the Dark Side of the Net with Hacktionlab

In June 2013 Edward Snowden revealed our worst fears: that our governments have beenspying on us. This workshop looks at what it means for us, and what we can do to about it. Welcome to the Dark Side of the Net!

The Room With A View: North Morocco’s migration crisis with Interzone Voices

The crisis faced by 10,000+ Subsaharan African migrants in Morocco is an under-reported atrocity committed by the EU against non-white people. Hear the testimony of migrants themselves to understand the racist and imperialist system Anarchists seek to destroy.

A discussion on getting Sounds Systems off the ground, putting on parties and issues relating to the free party scene in Bristol.

Peter explains what the Transition Movement is and how it has grown from small beginnings in Totnes to a global movement of 1200 groups. Followed by a discussion on Transition and Anarchism, are they friends or opposing movements?

Black Star: Britain’s Asian Youth Movement (Pluto, 2013) documents the Asian youth movements in 1970s and 80s Britain who, inspired by Black Power movements, struggled against the racism of the street and the state.

The Dressing Room: No workfare! No sanctions! with Boycott Workfare & Bristol Claimants Union

Join us for a discussion on challenging workfare and benefit sanctions. We’ll share information on the rights we have and discuss how to organise to enforce these rights at the Job Centre and bring about the end of workfare.

An Introduction and Q&A with one of Bristol’s newest groups. What is patriarchy and why should men challenge it? What do we talk about? Do men have a role in feminism? Why have meetings for men only? How can we confront patriarchy? What are our future plans? All genders welcome.

How applicable today are attitudes to religion and state dating from revolutionary Russia or Spain? The two great evils to be destroyed or ignored! History can instruct us but can also make us force today’s events into an out-dated narrative. Do these attitudes increase or limit our social influence?

Throughout history people have organised to negotiate access to and responsibility for resources held in common. Common property shows participatory governance in action – an alternative to both state and market.

Find out about everyday resistance to World War 1 in the trenches of the Western Front, as skulkers, shirkers, and deserters avoided combat, whilst rebel dockers and socialist women resisted on the home front in Bristol.

The endless pursuit of economic growth is driving ever more extreme forms of energy such as fracking. The workshop gives an overview of the types of extreme energy and their ecologically and socially devastating consequences. It will also include a discussion on the growing global resistance, what fracking means for the UK, and how we can participate in building communities of resistance.

The Dressing Room: Workers’ Power in under an hour with Bristol IWW

Bristol IWW will run a tutorial on how to work together with your colleagues to challenge your boss and win better working conditions today and working class power tomorrow.

The Room With A View: Opposing the 2014 NATO Summit with No NATO Newport

In early September 2014, thousands of politicians, cops and businessmen, including 60 world “leaders”, will descend on Newport, S.Wales, for a summit of NATO. We’ll be there to try and stop them. Find out more about what’s planned and how you can get involved.

John Barker discusses his upcoming release – a novel set in 1987 London. Barker will be reading from the novel and discussing the finance industry, Thatchers’ Britain, the world of drugs and organised crime and the various links to the City.

Permanent Culture Now: Bristol Indymedia has had a refit

Find out how the new Indymedia site can help your group or what volunteer roles there are for people who want to get involved. If you have used it let us know what you think about the new site and what else we could be doing.

A documentary, produced by Ian Bone, popularising the 1661 insurrection against the restoration of the monarchy and evoking the Mystics and Anarchists of the English Revolution drawing parallels with today’s fight against the Royals and City of London Corporation.