bristolindymedia Posted on March 31, 2014 Posted in Newswire, Uncategorized No Comments 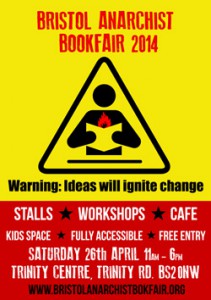 This year’s Radical History Zone will be taking place at Hydra Books, 34 Old Market, Bristol on Saturday 26th April. Events will kick off at mid-day and continue to 6.30pm. As last year the RHZ coincides with the Bristol Anarchist Bookfair at the nearby Trinity Centre.

It’s 40 years since Wally Hope started the Peoples’ Free Festivals at Stonehenge and 30 years since the last one.

Wally Dean will tell the tales of The Wallies and the Peace Convoy. He will take us from Wally’s utopian vision, his incarceration, and his suspicious demise, to the heyday of the anarchic free festival movement and its oppression at the hands of Thatcher’s Tory Party and the continuing struggle to free Stonehenge today. Wally Hope was the catalyst that spawned Crass and the anarcho-punk movement. His death still inspires conspiracy theories after all this time. Was it suicide… or was he murdered by the state? You decide!

The Fair Fight is a pulsating historical novel set within the world of female pugilists and their patrons in late eighteenth-century Bristol. It is an unputdownable story which takes you from a filthy brothel to the finest houses in the town, from the world of street fighters to the world of champions. Alive with the smells and sounds of the streets, The Fair Fight is a major debut. Anna Freeman a lecturer in Creative Writing at Bath Spa University as well as a multiple slam-winning performance poet who has appeared at festivals and venues across Britain including Latitude and Glastonbury. She lives in Bristol. The Fair Fight was winner of the Tibor Jones Pageturner Prize 2013.

Steve Hunt will launch his book about Street Farm, published by Tangent Books in April 2014

Street Farm were an anarchist collective that worked to green the counterculture during the 1970s. Peter Crump, Bruce Haggart, Graham Caine and their friends put together Street Farmer, an underground paper that, alongside mutating tower blocks, cosmic tractors and sprouting one-way signs, propagated ideas for the radical transformation of urban living which they called ‘revolutionary urbanism’. Taking inspiration from Situationism and social ecology, Street Farm offered a powerful vision of green cities in the control of ordinary people. The collective took part in the squatters’ movement, reclaimed the streets more than 20 years before RTS actions in London and were exponents of liberatory technology. They became ‘rock ’n’ roll architects’, going on the road across Europe to promote their ideas with multimedia slideshow presentations to a soundtrack of music by the likes of John Lennon, Jefferson Airplane and Hawkwind. In 1972 Graham hit national and international headlines when he designed and built the first ecological house, In 1974 he helped out in the Portuguese revolution by contributing his skills in alternative technology. And find out who the Bristol Gnomes were – you may already be familiar with their work…!

Anandi Ramamurthy will discuss the prejudice and political struggles which Asian youth movements have encountered in Britain.

‘Black Star: Britain’s Asian Youth Movement’ (Pluto Press, 2013) documents the vibrant Asian youth movements in 1970s and 80s Britain who struggled against the racism of the street and the state. Anandi Ramamurthy shows how they drew inspiration from Black Power movements, as well as anti-imperialist and workers’ struggles across the globe. Drawing on her intimate knowledge and extensive research, Ramamurthy shows how the struggle to make Britain ‘home’ led to a broad-based identity where ‘black’ was a political colour inspiring unity amongst all those struggling against racism. Ramamurthy documents how by the late 1980s this broad based black identity disintegrated as Islamophobia became a new form of racism. In the process the legacy of the Asian Youth Movements has been largely hidden. ‘Black Star’ retrieves this history and demonstrates its importance for political struggles today.

4.00pm-5.30pm WWI Shirkers, Skulkers, Deserters and the ‘Live and Let Live’ Strategy: Everyday Resistance to Combat on the Western Front in World War 1

Fraternisation between opposing armed forces on the Western front on Christmas Day 1914 is part of the British collective memory; sold to us a momentary ‘miracle’ involving a few hundred troops. Of far more interest are the massive scale and crucially the context for these events. The everyday ‘hidden’ resistance of troops on both sides to the conflict ranged from avoiding the front-line by numerous ‘fraudulent’ means through to indirect and direct cooperation between supposed enemies in the trenches. Various forms of these subversive behaviours lasted throughout the war despite the attempts of the ‘brass’ on both sides to suppress them. So come and find out why ‘Blackadder Goes Forth’ could have been a lot funnier and how Tommy and Fritz put their ‘cunning plans from the University of Cunning’ into action.

Freedom of Soul: Bristol and opposition to the First World War

Two weeks before the outbreak of the First World War, Bristol dockers voted for Britain maintaining neutrality and, although their union’s leadership wavered, the local Independent Labour Party kept up its opposition to the war to the bitter end. When many of its local male activists were sent to prison, women members continued to leaflet the case against the slaughter. Includes extracts from television programmes.

Epiphany is a hybrid documentary evoking the Mystics and Anarchists of the English Revolution. Highlighting two little-known religious and political movements of the 1600s’ Republic, The Fifth Monarchists and the Muggletons come to life in London as told by contemporary leading anarchists: Ian Bone and Martin Wright star as John Thurloe (Cromwell’s spymaster) and Thomas Vennner. Venner led the only uprising through the city against the restoration of the monarchy in 1661. Epiphany is a modern take on the parallels of the revolutionaries of the 1660s and today’s ongoing fight against the monarchy and the City of London Corporation.
See also: http://www.brh.org.uk/site/articles/unfinished-business/