↓ Skip to Main Content
Home › Main Feature › The rise and rise of the amateur – how the social economy is taking off, in Bristol and beyond

bristolindymedia Posted on April 18, 2014 Posted in Main Feature No Comments 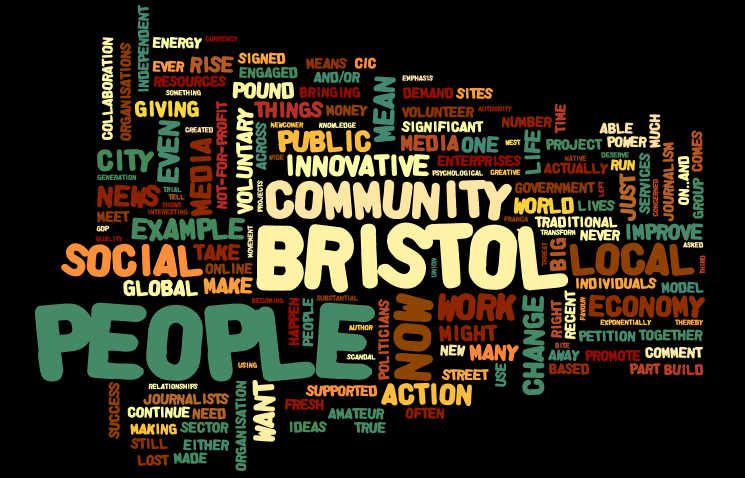 As the cuts to local Government and thereby to front-line council services continue to bite, money is sucked away from everything from arts and cultural projects, waste disposal, drug and alcohol services to benefits and childcare provision. A hole is left. And just because the investment is no longer forthcoming does not mean the need, and desire, for these things disappears.

Just because local newspapers are closing and National print journalism is in decline does not mean people don’t want news – especially local news, relevant to their area. When asked they say that’s exactly what they want.

People are more cynical than ever about the traditional bastions of power and authority. These behemoths (Murdoch’s Newscorp, for example) seem to have lost the public’s respect, let alone admiration. But that cynicism does not mean public apathy; there remains a belief that things can, and should, be better.

Bankers, politicians, journalists.. Three professions which have, over recent years, rather lost their kudos. The institutions they represent, if not the individuals themselves (and very much individuals, in many cases), are simply not well trusted:

An Ipsos MORI poll (2013) shows 18% of people trust politicians to tell the truth. This is actually up from 14%, in 2011, which could be reasonably ascribed to the of MP’s expenses scandal revealations.

Even the police forces’ reputation has been badly damaged, of late, as a significant minority have been exposed in the media for being corrupt, or incompetent, or both.

And that same media doesn’t escape untarnished, either. Far from it. The Leveson Inquiry is still fairly fresh in the mind, not least because the trial of ex-News of the World editors and journalists continue to pass through the courts.

That is where the ‘bold new world’ comes in – often called the social economy, made up of voluntary and community organisations, social enterprises and co-operatives – it is very much a bottom up movement.

Not only is the demand ever greater for willing, concerned and engaged members of the public to take action to improve society for themselves (and their children), but the means has never been more readily available.

The democratization of tools and information today afforded by the Internet and an access to digital technology is mind-blowing. And that is seen as a threat by some: it is true to say the advantage lies strongly in favour of the younger generation – whose near- embryonic exposure to the tech means a native grasp of the language of social media, apps and coding – now the global lingua franca.

It is now possible to build a network and forge a community of like-minded people, online, who have “the world’s information..universally accessible” (Google’s mission statement) at their fingertips, and with sites such as Wikipedia, knowledge is power. These same people can promote their ideas, sell their work and disrupt the monopoly of control, up to now exercised so totally by the large commercial organisations.

Self-publishing is one example. Amazon was a forerunner but there are now many, many more sites providing a market place and global shop window for people to promote themselves and their products.

A blog can reach a worldwide audience in seconds and inspire comment and facilitate conversations between people who might otherwise never meet; things happen when people get together. Meetings can lead to collaboration and exchange of ideas, a pooling of resources and energy and that is a recipe for change. That change might be on a single street – a petition signed for improved street lighting – or global – a petition signed to stop using pesticides which harm bee populations.

Either way, this phenomenon is happening, exponentially, right now across Britain and the world, and Bristol happens to be particularly good at it.

Bristol has a thriving and innovative Third Sector, which makes up a substantial part of the city’s economy. They are even becoming the economy, literally, in the face of the Bristol Pound: the first city-wide local currency run as a not-for-profit partnership between the ‘Bristol Pound CIC’ and Bristol Credit Union. It aims to keep the money made in and by Bristol in the city and working it’s inhabitants; operating since 2012, growing in use and popularity the Bristol Pound is a prime example of an innovative local initiative having a huge impact. And again, brought about by a few committed, engaged citizens, who believed that their action could make a difference.

This is one big example but there are dozens, hundreds and thousands more, big and small. A lot of people are now giving up their evenings, weekends and even making sacrifices to their primary careers – the bread- winner, so to speak – to engage in community work across a wide range of industry sectors.

A ‘Community Life’ survey, carried out by the Government in 2013 showed an increase from 39% to 45% of people who had undertaken some kind of voluntary work. Now, even if we take this number with a pinch of salt (the number is supported elsewhere) that rise is statistically significant.

People who cannot take on a new project as their sole source of income are still committing to their chosen cause, group or organisation and giving time, real energy and often bringing professional expertise to bear; there is even some interesting evidence to suggest people actually work harder in the voluntary sector, due to psychological factors, such as a sense of entitlement which comes from paid work.

What is certainly true is the cliché, that the term amateur (also read ‘volunteer’, ‘not-for-profit’ and ‘local’) does not mean low quality or sub-standard.

Everywhere one looks, in Bristol, there are social enterprises springing up to replace where either a public service has been cut or a traditional (old-school, commercially oriented) supplier has failed to meet a need or want:

Happy City are a CIC whose driving philosophy is to enact a change away from a GDP based model of success, well-being and happiness and toward a social model which places emphasis on how connected we are to our community, the relationships we can build and sustain and how able we feel to influence and improve our lives.

The Domino Effect Project is a community action group which exists to transform the lives of those who come from a shared background of chaos and/or addiction by giving those on the program skills and understanding to improve confidence, figure out what they want from life and how to make a plan which will help them to achieve those life goals.

The Bristol Cable – a newcomer to the scene, and recent crowd-funding success, is a people’s media cooperative “created, owned and produced by people in the city”. By bringing people together from all walks of life to create a multimedia content provider of news, what they call “an innovative blend of community action and journalism”. And they are right – it is innovative and it is a fresh, independent style of news that is in now in big demand.

And it is in Bristol. Along with 24/7 (online independent newspaper), Knowle West Media Centre (community-run, project based organisation putting resources in the hands of those who deserve it, and have the talent to make use of it, but might not have been able to pay for it), The Cube (volunteer run cinema) and Pervasive Media Studio (community of artists, creative and technologists supported by Bristol’s two Universities)..the list goes on..and on..and that is just the Media sector.

In a city of just over 400,000 people the scope and appetite for connection, collaboration and engagement in making change happen is at an all time high.

What are you doing to be a part of it?

(That’s not a rhetorical question. Please do comment or e-mail me with your thoughts and/or personal experience, who knows – it could spark something!)