bristolindymedia Posted on May 4, 2014 Posted in Main Feature No Comments 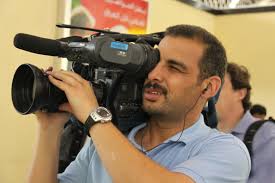 The next monthly BRFF/Indymedia night at the Cube Cinema will take place on the May 5th bank holiday Monday. This event coincides with World Press Freedom Day (WPFD) on the 3 May, and our guest Qais Najim has a pertinent story of his own in this context.8pm – 10pm, £5/£4 though no one turned away for lack of fundsWorking as a journalist in a war zone can be dangerous enough, but there are particular dangers for local journalists working for external agencies. Qais Najim, an Iraqi journalist who worked as a translator, cameraman and editor in the BBC’s Baghdad office for the last 11 years, will be at the Cube to discuss his ongoing struggle. Frequently challenged and threatened by other Iraqis who disapproved of those working with foreign broadcasters, Qais sent his family into hiding and sought asylum in the UK after receiving death threats last year. He will be showing excerpts of the work he’s produced for the BBC, stories concerning bombings, kidnappings, refugees, clashes & demonstrations in numerous countries in the Middle East.

This year’s WPFD is concerned with three inter-related themes: the media’s importance in development; the safety of journalists and the rule of law; and the sustainability and integrity of journalism.

Please share this event with your networks; we hope to see you on Monday!