bristolindymedia Posted on May 21, 2014 Posted in Main Feature No Comments 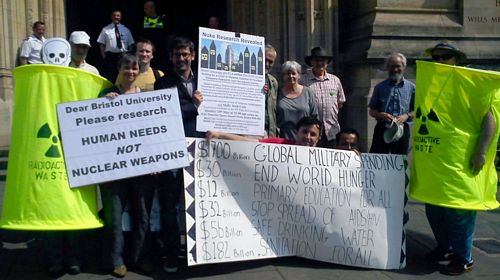 Lead Green European candidate in the South West, Dr Molly Scott Cato, joined campaigners in Bristol on Monday (19th May) to draw attention to Bristol University being among the top five universities in the UK receiving funding for research into nuclear weapons.

“As a party with a track record of protest against nuclear weapons and Trident I unreservedly support this demonstration. The Common European manifesto makes clear our opposition to financing military research from the EU budget and our support for nuclear disarmament both in Europe and globally [3]. Likewise, The Green Party in England and Wales believe that immediate nuclear disarmament is an absolute priority. We would like to see 2014, the year commemorating the outbreak of the First World War, as the year we ditch Trident, begin to dismantle the destructive arms trade and invest instead in peace-keeping.”

Dr Molly Scott Cato was joined by students from Bristol University plus campaigners against the Arms Trade, Nuclear Power, and Militarism. Also joining the demonstration were members of the Green Party, Greenpeace, and the Quakers,

Dr Rowland Dye, a resident of Bristol who organised the demonstration said:

“It’s shocking the Government is handing out tax-payers’ money for nuclear weapons research and that some of this work is going on in our city. Britain’s existing Trident nuclear weapons system could incinerate 45 million people at the press of a button. And the Government is planning to develop it further! Shouldn’t this money and expertise be better spent on essentials of life, not planning death and destruction on an unbelievable scale? We have pressing needs to solve run-away climate change as well social issues such as health, education, housing and employment. Let’s spend this money wisely on people’s needs!”

He goes on to say “We’re sure the powers-that-be will try to hide behind the myth this is merely ‘blue-sky’ pure research. But the reality is the Government doesn’t fund research for no reason. Anything that helps building nuclear weapons is wrong and should be diverted to more useful causes. We have pressing needs to solve run-away climate change as well social issues such as health, education, housing and employment. Let’s spend this money wisely on people’s needs!”

As a former student at Bristol University, Vice President of National CND, Dr Rebecca Johnson FRSA, has also lent her support to the demonstration. She said:

“Research that contributes to the replacement of Trident is an egregious violation of the UK’s binding international treaty obligations to eliminate nuclear weapons. I urge the University to reject this corrupt funding for nuclear weapons research and proliferation. These weapons breach our human security and would cause a humanitarian catastrophe if used. The only legally justifiable research is in verifying nuclear disarmament and ensuring that existing weapons are safely and securely dismantled and eliminated.”

Ornella Saibene SWAN South west Against Nuclear which campaigns against the Nuclear Power Station such as Hinkley, says “The production of plutonium in nuclear power stations for our weapon proliferation system has created a massive legacy of waste at Sellafield , where the equivalent of 4 Albert halls full of nuclear waste is held. Instead of nuclear weapon proliferation the Government and the University should admit to the horror and devastation that the nuclear industry has brought upon countless of generations. In the light of Fukushima and from the experience we have gained from Chernobyl, we should be investing in decommissioning instead of proliferation.”

Angie Zelter from Action-AWE, a national group that campaigns against Trident says “We’ve got between now and the general election in May 2015 to turn the political spotlight on the decision to replace UK Trident nuclear weapons system. From academic research through to the UK nuclear bomb factories at Aldermaston and Burghfield in Berkshire, and finally through to the warheads on the submarines at Faslane in Scotland – this is the nuclear chain. We must take action to halt this whole insane process.

A report published earlier this year [1] shows that the Atomic Weapons Establishment gives over £8m a year in research funding to more than 50 Universities. Most of the money goes into five of the UK’s leading universities [2], with Bristol University receiving £1.3 million between 2010 and 2012.

[3] EUROPE IN THE WORLD – Common Manifesto 2014, Working for Peace:
http://europeangreens.eu/common-manifesto-2014/europe-world