↓ Skip to Main Content
Home › Main Feature › Where is the protest

Where is the protest

bristolindymedia Posted on May 8, 2014 Posted in Main Feature No Comments 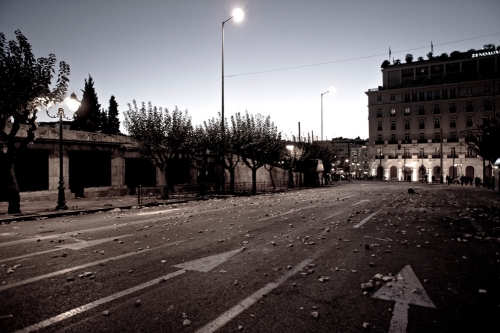 Disclaimer: Clicking on Links in this article may record your IP address, if your worried about this then check out tech tools for activism.

This is the first of a new practice at Indymedia of promoting articles that we think are of relevance to the peoples of Bristol and the South West.

In Bristol and the rest of the UK, protest seems pretty quiet, especially considering the attacks on us under the Austerity agenda that is fundamentally dismantling the gains of common people such as the NHS, benefits system and much more. Why is this, why are we not seeing massive protests and constant resistance against these policies. Why is it that the protest vote has become UKIP, which as Stewart Lee quite rightly stated is like shitting in your hotel bed because of bad service and then realising you have to sleep in it. There are many discussions being had around the city and wider around this topic. This article responds to two articles by Graeber and Lapavitas, where Jerome Ross puts across his views so you get 3 separate analysis on this issue. What do you think of what they have to say, is this relevant to Bristol and the South West, let us know in the comments.

Where is the protest? A reply to Graeber and Lapavitsas

Yes, we’re nice people, and yes we have been sapped of our energy. But the main reasons we’re not protesting are deeper and must be targeted directly.

Last week, two commentaries appeared in The Guardian — one by David Graeber and the other by Costas Lapavitsas and Alex Politaki — basically asking the same question: given that we’re under such relentless assault by the rich and powerful, why are people not rioting in the streets? What happened to the indignation? The screws of austerity are only being tightened. So where are the protests? The two pieces provide two very different answers to the question, and while each contains a moment of truth, both ultimately remain unsatisfactory.

Before turning to the articles, however, we should note that things are not as bad as it would seem from a cursory glance at the headlines. Back in 2010-’11, popular protest was a novelty and it was all over the mainstream media. Today, resistance is widespread, but we no longer see it reported in the news. To give just the most obvious example: two weeks ago, Madrid experienced one of its biggest demonstrations since the start of the crisis, with hundreds of thousands taking to the streets. Despite the enormous turnout and the violent clashes that broke out towards the end of the march, the Spanish and international media chose to systematically ignore the event.

Do we care too much?

That said, there’s an impression that the protests have subsided in frequency and intensity since 2011. Why so? In his article, anthropologist David Graeber argues that the working class simply “cares too much.” In his words: “working-class people [are] much less self-obsessed [than the rich]. They care more about their friends, families and communities. In aggregate, at least, they’re just fundamentally nicer.” In a way, Graeber is right to highlight this moral chasm. Recent research has yielded a plethora of scientific evidence that the rich — and their “rational” acolytes in economics departments — are indeed much more selfish than common folk. Here in Athens, communal solidarity and mutual aid is singularly responsible for maintaining the social fabric in the face of this destructive selfishness of bankers and politicians.

But can we really infer from this somewhat moralistic observation that the fundamental niceness of working people — combined with the displacement of their sense of solidarity into abstract concepts like national identity — provides a “partial answer” to the mystery of the empty street? That conclusion strikes me as slightly misplaced. After all, as Graeber himself can attest, there were plenty of ordinary people out there in the streets in 2011, building up protest camps on the basis of solidarity. Why are we no longer out there today? Have we suddenly become so much more caring towards the rich and so much less solidary with one another? What changed? It seems to me that we should be focusing not so much on the moral virtues of workers but rather on the social causes of the ephemeral and ineffective nature of contemporary protest per se.

Here, the article by political economist Costas Lapavitsas and journalist Alex Politaki — which focuses more specifically on European youth protest, although their question is basically the same as Graeber’s — provides a slightly more dynamic explanation. According to Lapavitsas and Politaki, “the answer seems to be that the European youth has been battered by a ‘double whammy’ of problematic access to education and rising unemployment.” This, in turn, has “sapped the rebellious energy of the young, forcing them to seek greater financial help from parents for housing and daily life.” As a result, “the young have been largely absent from politics, social movements and even from the spontaneous social networks that have dealt with the worst of the catastrophe.”

At first sight, this argument seems to have some explanatory merit. Upon closer inspection, however, it clearly contradicts itself. Back in 2010-’11, everyone — including Lapavitsas — cited rising unemployment as a major factor behind the protests. Now the same people are citing rising unemployment as a reason for the lack of protests? That explanation hardly seems to hold water. In 2012, Lapavistas wrote that “this situation is manifestly untenable. It brings unemployment … and spreads hopelessness across Europe. As the eurozone moves deeper into recession in 2013, social and economic tensions will ratchet up across the continent.” Except, they didn’t. As the eurozone moved deeper into recession, the streets all but emptied out. You cannot retroactively account for that fact with the same economistic reasoning you once deployed to predict the opposite outcome, unless you explicitly posit the existence of some kind of threshold at which economic hardship starts to actively discourage popular protest — but Lapavitsas does not do that.

So, apart from the most immediate factor inhibiting protest (i.e., violent state repression), why are we no longer out there in the streets? I would suggest that, if we look a bit deeper and move beyond mere surface manifestations, we can identify at least three interrelated factors — all long-term developments coming to the fore today — underlying the relatively ephemeral character of contemporary protest:

In a future article, I will try to dissect these three factors in greater detail and provide an overview of what I see as the main challenges that the movements face in rekindling the radical imagination. Here, however, I just want to highlight one critical point: neither Graeber’s moralistic narrative (counterposing the fundamental niceness of working people to the selfishness of the capitalists), nor Lapavitsas and Politaki’s economistic reading (explaining the decline in protest through the lack of access to jobs and higher education) provides us very much in the way of an analytical-strategic framework to help revamp the resistance in this phase of relative demobilization. What we desperately need right now is a serious debate within the movements on how to break down the neoliberal control mechanisms of precarity, anxiety and futility — and how to adapt our protest tactics and organizing strategies accordingly.

If we are serious about moving beyond the revolutionary moment of 2011 and building a radically democratic anti-capitalist movement that can actually endure and change the material constitution of society, we will first of all need to find ways to disarm the structural and ideological mechanisms of capitalist control. While I do not pretend to have any easy answers on how to do this — David Graeber’s grassroots organizing in Occupy and his direct involvement in the Strike Debt campaign is much more instructive in this respect — it seems to me that recognizing the systemic importance of precarity, anxiety and futility is a crucial first step in the process of revamping the resistance. Only by directly targeting the structural, ideological and psychological mechanisms that sustain the rule of capital can we begin to recover a sense of social solidarity and craft lasting and meaningful alternatives to financial dictatorship.

Jerome Roos is a PhD candidate in International Political Economy at the European University Institute and founding editor of ROAR Magazine.